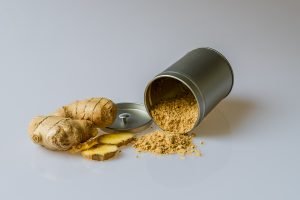 What you eat and how much you exercise, sleep or live a basically healthy lifestyle, has a big effect on your health if you’re diabetic. It’s true for both type 1 and type 2 diabetics. However, that’s where much of the health information ends. Those with type 1 diabetes fail to produce insulin, while people with type 2, start by not using insulin effectively and eventually don’t make enough. That’s why diet and exercise can often help people with type 2 reverse the disease, but not cure it. This discussion of the benefits of ginger for diabetes, focuses primarily on type 2 diabetics.

Ginger is known for its many healing properties. In fact, not too long ago, drinking ginger ale was the “go to” remedy for an upset stomach. However, ginger also has a low glycemic level, meaning it won’t cause blood sugar spikes. Even small doses of ginger can help diabetics lower their blood sugar levels. Not only that, one study found that combining it with cinnamon, another spice that helps lower blood sugar, can potentially help reduce fat and body weight, while increasing insulin levels.

Supplementing with ginger powder may also improve fasting blood sugar levels. It also improved other markers that showed it could help to protect diabetics from certain complications, such as heart problems. Ginger is an anti-inflammatory. Chronic inflammation can lead to a number of diseases, such as arthritis, inflammatory bowel disease, heart disease, Alzheimer’s, obesity and more. It can even escalate the aging process.

There’s a difference between fresh and dried ginger, but both have health benefits.

Both dried and fresh ginger have benefits for diabetics. Fresh ginger contains more gingerol, which provides the benefits. The dehydration and grinding of ginger tends to reduce the gingerol, but it also increases shogaols, which also provide health benefits, many of which gingerol provide. If you want to maximize both types of benefits, alternate between using dried ginger root, which is convenient, and fresh.