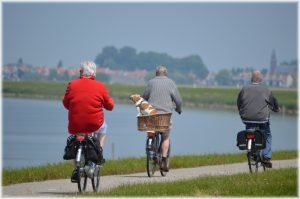 I’ve recently heard one of my clients talk about their aunt, touting how mentally sharp she was for her age. It seemed to assume that the older you get, the more you “dumb down.” While you might think it’s true, it’s not the number of years you live that determine your mental sharpness or a guarantee that senility is part of the aging process. Even though genetics also plays an important role, it’s the lifestyle you live that makes a difference whether you’re mentally viable in your senior years. Here are some natural ways to fight mental aging.

Get plenty of exercise.

Studies show that exercise can help improve cognitive functioning. In fact, just walking briskly can help bring big changes in the brain. A study in 2017 determined that not only did walking briskly three times a week for an hour lower blood pressure, it also helped improve thinking skills. Another study showed that people with the e4 gene—APOE epsilon4, a gene that identifies people at risk for Alzheimer’s, could lower that risk with exercising. After 18 months of studying four groups of people, two groups with the e4 gene, one group exercising and one group not and two groups without it divided the same, the e4 group who didn’t exercise had significant atrophy of the hippocampus area of the brain, which is a signal for the onset of Alzheimer’s. Other studies show exercising boosts brain activity.

Healthy eating and weight control, along with regular exercise helps reduce the risk of high blood pressure, diabetes and high cholesterol. There’s a huge correlation between cardiovascular disease and cognitive impairment. Atherosclerosis, for instance, means that fat and cholesterol causes inflammation that thickens the arteries and slows the blood to the brain. Lower levels of oxygen and nutrient laden blood affect brain cells.

It may sound odd, but how you sleep makes a difference. A study in 2015 found that people who sleep on their side help the brain to clear waste products and by doing that, lowers the risk of diseases like Parkinson’s and Alzheimer’s. Most wild animals and people tend to sleep on their sides for a reason. It helps the brain function at optimal level by improving the waste removal in the glymphatic and lymphatic systems. The waste are chemicals, tau proteins and amyloid that can build up and affect its functioning. Side sleeping also lowers the risk for sleep apnea and reduce snoring.