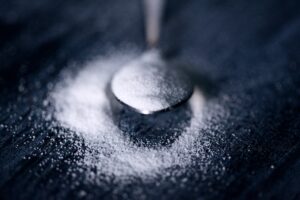 Some other side effects of artificial sweeteners are seen immediately.

If you’ve ever consumed a lot of candy with sorbitol, maltitol and mannitol, you might have experienced gas and explosive diarrhea. It’s certainly not fun, especially if you’re out in public. Artificial sweeteners can also cause rashes. Other diseases linked to the consumption of artificial sweeteners include chronic fatigue syndrome, autism, Parkinson’s, systemic lupus, MS and even cancer.

Not all alternative sweeteners have the same effect.

A naturally sweet leaf from a plant called Stevia rebaudiana is being marketed under the name of Stevia. It comes from South America and used for sweetening for years and now used as medicine, since it has properties that lower blood pressure, blood sugar and is anti-bacterial. It’s said to be 100 to 300 times sweeter than table sugar, so a very little goes a long way. Recent medicinal uses show it helps lower blood pressure by as much as 14%. Perhaps it’s because Stevia is actually natural, and not a sweetener made in a lab. It’s been used for hundreds of years and has a proven track record. Unfortunately, the FDA doesn’t allow the leaves themselves to be used, so they’re highly processed, which can include altering them with enzymes, making changes that haven’t been investigated.

Why do some artificial sweeteners cause more weight problems than regular sugar?

The study that showed people who drank more diet soft drinks had far bigger waist circumference than those who didn’t, indicating visceral fat, made some hypothesis on why that occurred. They suggested it might increase the potential for glucose intolerance, while also interfering with metabolic functions. Another study showed that it was more than just calories that created the problem with belly fat. The artificial sweetener can trick the brain and cause inflammation throughout the body.

For more information, contact us today at Iron Fit